Knights fail to secure the win against bottom placed Bulleen

With only two games of the regular season remaining, the Knights returned to action on Monday night after a lengthy 17 day break. Round 25 saw the side play their final away match as they travelled to the home of FC Bulleen Lion at the Veneto Club in Bulleen. On paper, the Knights easily were the favourites to take all three points, but as we have seen already this season, any team on any given day cannot be disregarded.

Jordan Gifkins returned between the sticks for the Knights, as mid field stalwart Tomislav Uskok was absent from the starting line-up due to a suspension sustained in Round 23 against Avondale FC.

Here’s how we stack up in a our penultimate regular season match. #itsyourclub #mkfc pic.twitter.com/6EAdeEmgBi

The Knights got started as soon as Lachlan Keevers’ whistle blew, quickly settling into the match despite the 17-day break. The opening minutes saw the side try to establish dominance over their cross-town hosts, keeping the ball safely in possession without too many turnovers. Luke Jurcic proved to be too much for his marker to handle, often bounding down the right flank towards goal, where he would find himself in position to cross it into the box.

A chance fell for the visiting Knights when a poorly cleared ball found its way to forward man Kym Harris, who was directly in front of goal with little obstacles in sight. However, Harris’ shot on goal lacked the necessary pace and direction to really test Lions keeper Wyatt Chant and ultimately went wide of a well-guarded goal face.

The only goal of the match came for the home side in the 24th minute thanks Matt Groppo’s clean finish in front of goal. With the Knights now once again on the back foot, a more aggressive front line was required to try and get the side back in the game. Nate Foster looked likely to score within five minutes of the opening goal, finding himself one on one with Chant, but sent the ball over the crossbar and out of danger for the Lions. With chances falling every five minutes or so for the Knights, it seemed likely the side would find the crucial equaliser before half time, however Keevers shortly after signalled the end of the half, and the Knights went into the change rooms unable to come up with any answers for coaches Aljosa Asanovic and Dean Racunica.

The second half was much of the same for the Knights, with most of the possession falling for the side. However the possession counted for little as the Knights failed to convert chances up front, lacking that clinical final touch to get themselves back into the match. Things took a sinister turn ten minutes in as a scuffle broke out on the sidelines which saw Shaun Timmins receive an immediate red card, reducing the Knights to ten men, and a yellow card for Teeboy Kamara and Ethan Docherty for their involvement.

Fate then dealt the Knights another blow, when staple star defender Ayden Brice was unable to continue the match, ultimately being stretchered off and forcing Asanovic to make a substitution which saw Tim Purcell enter the fray in the 70th minute.

The Lions looked to capitalise on their advantage but were unable to find their second goal despite a clear chance on goal by Daniel Scopelliti. Their advantage was short lived however, as Matt Groppo collected his second yellow card for the match after a late challenge on Nikola Jurkovic. Groppo’s sending off levelled the sides and gave the Knights a glimmer of hope leading into the final 20 minutes of the match. With one hand on his book for most the of the match, Lachlan Keevers pulled out his book once again just before full time and awarded Ethan Docherty with an immediate sending off after collecting an advancing AJ Inia, enraging Lions coach John Maisano in the process, who also found himself sent off the sideline.

Despite playing the remaining ten minutes with a man advantage, the Knights were unable to come up with any solutions to the problems faced during the night and the match ended with the home side taking the points thanks to Groppo’s early efforts.

The implications of the loss are huge for the Knights, as four NPL sides are vying for the coveted sixth spot on the ladder. With only one remaining game, chances of the side competing in finals footballs rests on a specific series of events that need to unfold in Round 26. First and foremost, the Knights must win against Dandenong City, who are also in contention to play finals and will be looking to keep the Knights out of the top six. Secondly, Port Melbourne would need to fall at the hands of South Melbourne, in order to not widen the gap between sixth and seventh place. Thirdly, Kingston City must lose or draw against Green Gully away.

With one match remaining of the regular season, we urge all fans, big, small, young and old to come along to Knights Stadium and be the 12th man this Sunday afternoon, to give your Knights a final possibly push into the finals. Round 26 sees Dandenong Thunder SC make their final trip away to Knights Stadium, along with what is expected to be heavy away supporter presence. Kick-off is slated for 3pm on Sunday the 2nd of September at Knights Stadium. 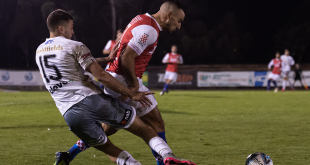 The Melbourne Knights will return home this weekend, for a tricky round 20 encounter with …